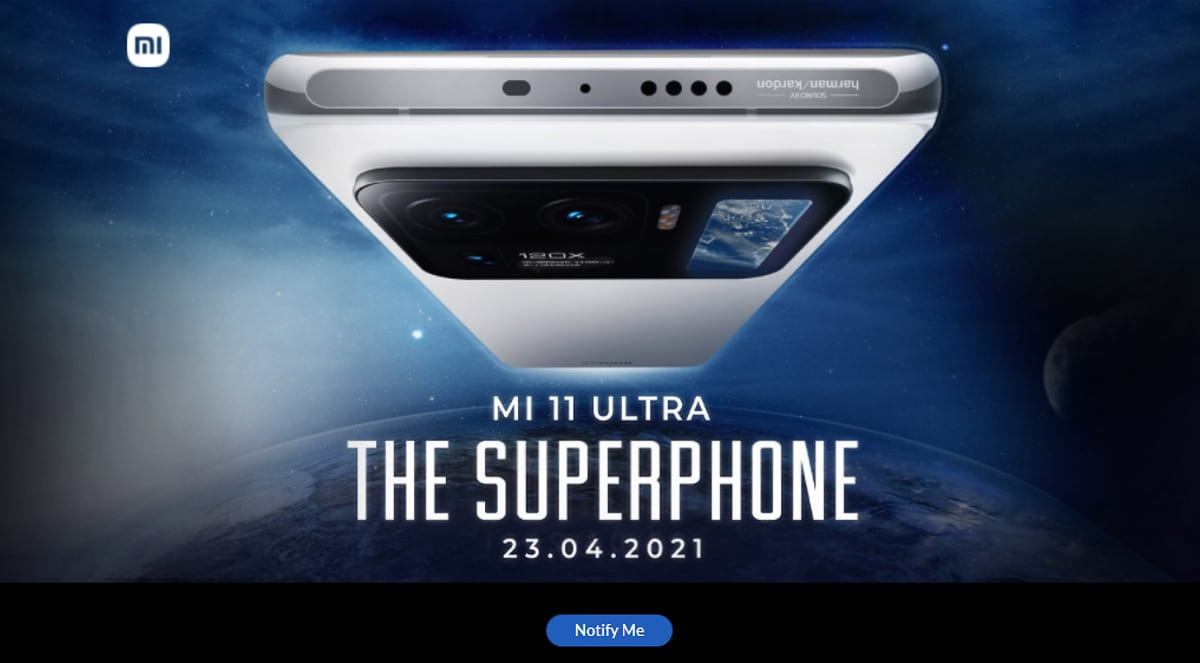 The Mi11 Ultra smartphone was recently launched in China, which is expected to be launched in India a few days later. Xiaomi India says that the M11 Ultra smartphone will be launched on April 23. A dedicated page has also been published for the key features of the phone. Apart from this, the Notify Me button has also been made live for the customers who want to buy this smartphone. The M11 Ultra is equipped with a triple rear camera setup with 120x digital zoom and a Qualcomm Snapdragon 888 processor. In addition to the E4 AMOLED display with the Curved Edge, there is a secondary touch display on the back of the phone, in which you can see the timing information and other notifications.

Xiaomi Has confirmed this Mia 11 Ultra The ‘Superphone’ will be launched in the Indian market on April 23. The company has started sending ‘Save the Date’ emails to the media for this. In addition, a page has been created directly on the website before the launch. ‘Notify Me’ has also gone live, through which customers who want to buy a smartphone can register for the phone.

Speaking of specifications, the dual SIM (Nano) Mi11 Ultra phone runs on Android 11 based MIUI 12 and has a 6.81-inch 2KWHD + (3,200 × 1,440 pixels) E4 AMOLED display with 120pHz display. This is what the rate offers. Equipped with 240Hz touch sampling rate, 551 ppi pixel density and Corning Gorilla Glass development protection. The phone has an A + rating of Display Mate with HDR 10+ and Dolby Vision. In addition, the phone has a 1.1-inch (126×294 pixels) AMOLED secondary touch display. It has always on mode and a maximum brightness of 450 nits. The purpose of the secondary exhibition is to motivate the user to take selfies using the rear camera. This display also contains information like notifications, battery level and weather warning. The phone is powered by a Qualcomm Snapdragon 888 processor paired with Adreno 660 GPU, LPDDR 5 RAM with 12 GB and 512 UFS 3.1 storage.

For photography, the M11 Ultra has a triple rear camera setup, with a 50-megapixel primary wide-angle camera, the Samsung GN2. It includes two 48-megapixel Sony IMX586 ultra-wide-angle and tele-macro camera sensors. The phone has a 20-megapixel camera for selfies and video calling.

The battery of the phone is of 5,000 mAh, with 67 wired wireless fast charging support and 10 watt reverse wireless charging support. The top phone of the M11 series is equipped with IP68 Dust and Water Resistance build. Connectivity options include 5G, 4G VoLTE, Wi-Fi 6, Bluetooth 5.1, GPS, NFC and USB Type-C ports. The phone has a Herman Kardon stereo speaker and an in-display fingerprint sensor. The phone measures 164.3×74.6X8.8mm and weighs 225 grams.